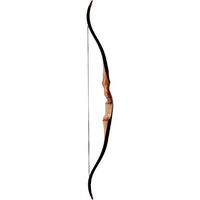 A yumi (弓), Japanese for bow, is a Japanese type of bow, used in Japanese archery or kyūdō. It is characterized by its extraordinary length, with a minimum of 200cm, even longer than the western longbow, and for its asymmetrical shape. The bow is held on one-third from the bottom side and has five curves, three in the direction of the shooter (at each end and where the hand is placed) and two away from the shooter. The joints of the bow are called fushi (節). The bow string is called tsuru (弦).
Retrieved from "https://roleplay.fandom.com/wiki/Yumi?oldid=47165"
Community content is available under CC-BY-SA unless otherwise noted.