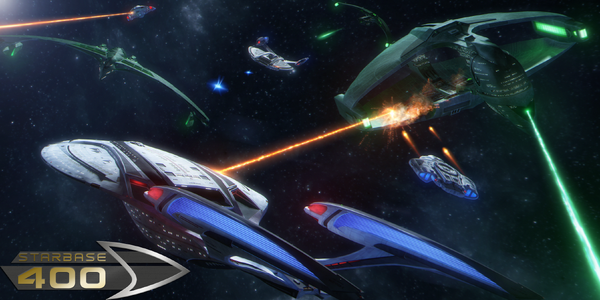 is a NOVA played Star Trek sim in Theta Fleet. Active continuously since 1995, Starbase 400 is one of the longest running sims on the internet. Founded in Seventh Fleet, this sim has also served in Tango Fleet, Bravo Fleet, as an independent sim, in Antares Fleet, and The Ninth Fleet and independent again, Bravo Fleet again the 22nd Fleet, and now in Theta Fleet as of 2022. The sim has been administered by Mike Bremer since 1996 and is one of the most decorated and influential sims in Role Play History.

Out of Character Information

The Starbase 400 site has won nearly 50 awards over the years, and her members have won even more! Here's a full list of awards won by the site, sim, and crew over the years - *Simm/Crew Awards

Starbase 400 is a NOVA played sim. It has been administered by Mike Bremer since 1996. The sim itself began as the USS Pegasus in 1995 and has been running constantly since then, and was the first member sim of Tango Fleet in 1995 and Bravo Fleet in 1997. In 2006, the Pegasus sim went though a major in character plot change and became Starbase 400. Joining the Pegasus at SB400 was the USS Yorktown formerly of the Avalon Fleet Yards sim. The sim was also the first to win the Bravo Fleet Admiral's Commendation Sim of the Year Award (later known as The Michelle Cox Memorial Simm of the Year award) in 1997.

Starbase 400 takes Canon Trek and mixes it with elements of Simi-Canon (Novels) as well as the Simm's history to make a unique simming experience! Read though the mission logs or about the support vessels...we know you'll be intrigued.

In mid 2014, Starbase 400 launched a Banner Exchange service for SciFi Sites and Sims to help each getting a little more advertising and visitors. 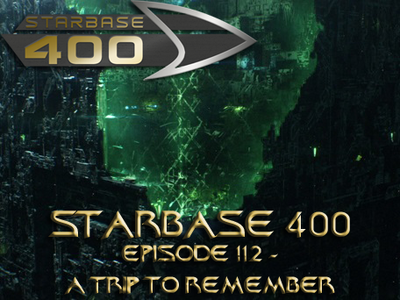 Episode 107 – A Trip to Remember -The new USS Pegasus-C and the USS Endeavour are sent to The Artifact in Romulan space to examin the remains of the Borg crew, meet with the administrator of the Borg Reclamation Project, and confirm the safety of Federation civilians. Meanwhile, the USS Falcon and USS Buccaneer attempt to meet with leaders of the Fenris Rangers.

Role: Federation Starbase and Ship Yard, Orbiting the new Colony on Kaleb IV, on the edge of The Triangle 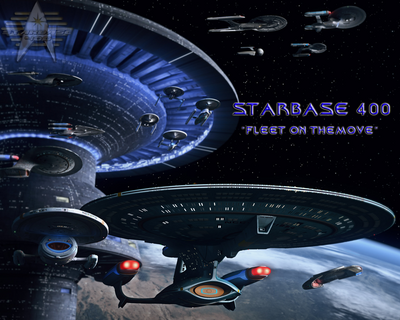 Starbase 400 was completed in 2369 on the edge of The Triangle, where Federation, Klingon, and Romulan borders meet, orbiting Kaleb IV. It was hoped that having an advanced starbase in the area would not only make the Romulans think twice about crossing into the Neutral Zone, but also service as a location for diplomatic meetings between the three super powers. Starbase 400 soon became one of the main base of operations for the 4th Fleet.

During the Dominion war, SB400 serviced as a remote staging area for Klingon and Romulan fleets heading toward the front lines. Following the war, SB400 serviced as one of the main refit and supply bases for Starfleet vessels leaving the front lines. Starships would be refit for peace time service and crews rotated to other ships or back to there home planets for R&R. In 2380, this duty had been fulfilled and SB400 returned to the Diplomatic role.

Following the Shinzon coup, the Romulans wanted to continue diplomatic talks, and several of these were held at SB400 before being moved to Earth. During this time, SB400 began to run into disrepair. With supplies being sent to further out Starbases to restock their stores and trained crews transferred to new ships and bases, SB400 began to see neglect. Commander Conners, the station commander requested additional supplies and crew, but these requests were ignored. Starfleet's main goal was to bring the outer ring of starbases back up to full strength, while also getting the fleet back on its feet as well.

With tensions between the Federation and Romulans eases, SB400 was seen as 'expendable'. Plans were made to deactivate the starbase within two years, however Commander Conners requested an early retirement. With no available commanders to take command, Starfleet Command decided to shut down the base. At the same time, Fleet Admiral Bremer was considering retiring from command again.

Hearing about SB400's situation, Bremer requested taking the USS Pegasus to Starbase 400, and taking command. Starfleet declined, saying these had no plans for an Admiral to serve as commander of the starbase. Mike requested a demotion back to Captain to take over SB400. After much consideration, this was approved. The Starships Pegasus and Yorktown joined the neglected USS Luna as 400's support vessels, later also joined by the USS Vanguard and USS Durga. In less than a year, with tensions still on the rise, Bremer was promoted back to Admiral and additional support vessels were assigned to Starbase 400.

In 2384, Captain Bremer was again promoted to Admiral and the 4th Fleet's Operations Officer. At the same time, the Federation Council approved the construction of a colony on Kaleb IV and the USS Intrepid and USS Vanguard also joined SB400 as a support ships. Starship construction finally began again at SB400 that year, with the USS Vanguard (Sovereign Class, named for the recently decommissioned Excelsior class ship of the same name) NCC-82009 being the first ship completed in early 2385. Later that year, the USS Sutherland and Endeavor also where assigned, as was the 181st Tactical Fighter Wing.

In 2386, SB400 was reassigned to the Ninth Fleet, Task Force 94, as command base. Soon there after, the USS Vanguard suffered sever damage and was pulled out of service. Replacing her is the USS Lexington-D. Also joining SB400 are the USS Venator and USS Saratoga, bringing SB400's assigned ship complement to eight vessels. In 2387 with the USS Vanguard repaired, she was reassigned to SB400 and the USS Lexington-D was re-deployed. Also joining SB400 was the USS Kearsarge, an Intrepid class ship that replaced the USS Intrepid when she was also redeployed. A few months later, just after the destruction of the Romulan system, the USS Laffey, USS Tripitz, USS Avenger, and USS Alabama were also reassigned to SB400 as support vessels. Near the end of the year, the USS Constantinople and USS Steadfast were assigned to SB400, bringing her total to sixteen.

By mid 2391 Fleet Admiral Sevlek took over as Starfleet's Beta Quadrant Commanding Officer and he promoted Bremer back to Fleet Admiral and Commanding Officers of this important region of space, called The Ares Operational Theater with Starbase 400 designated a Command Base. With tension on the rise between the Federation/Klingon Alliance and the Romulans along with their Typhon Pact allies, as well as the recent war between the Krazzle and C'Hakilian Empires, Starbase 400 is set to be at the forefront during this time of change. 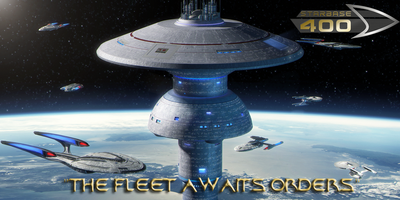 Additional Information:
Currently, there are 33 in service with 3 building.

These vessels are held in reserve at SB400;

Vessels under Refit, Repair, or Replenishment

Starships Operating within nearby sectors that respply at SB400;

Community content is available under CC-BY-SA unless otherwise noted.
Advertisement